Such an easy, healthy and nutritious meal!  Simple seasonings mix with lean ground turkey and farro for your new favorite dinner - and all for under 350 calories!

Marinara and fresh shredded mozzarella cheese are added in for a savory, italian-style kick while the farro gave a perfectly chewy texture and a great boost of whole grain nutrition to the dish.

I chose green bell peppers for a few reasons.

Two, they have a little more flavor than other peppers.

Three, they hold up well when cut in half and stuffed with lots of goodies.

I decided to use farro not only because I absolutely love it but also because I had a handy dandy bag of 10-minute farro in the cupboard and I was running against time on this recipe (it was a busy day). 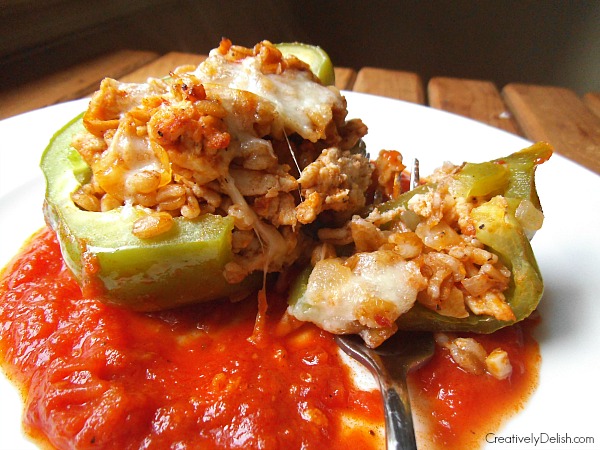 Which proves just how easy this is to throw together!

The prep work is a bit time consuming, but once I covered it and threw it in the oven, I had 30 minutes to shower, throw a load of laundry in AND feed the cat.

Besides, the prep work is supposed to be fun because your supposed to taste test every step of the way (just wait until the turkey is cooked please). 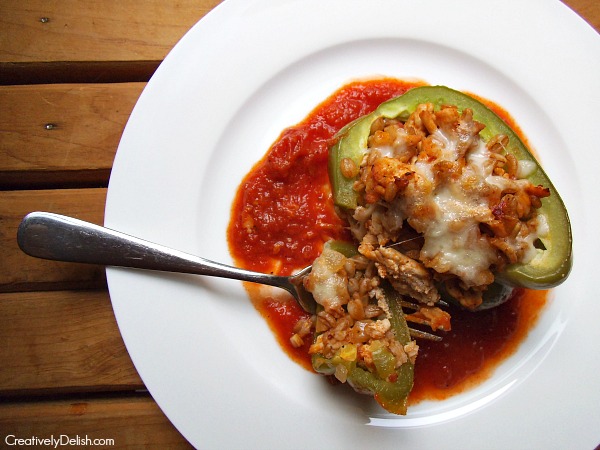 I only baked them for 30 minutes at 400 so that the peppers still had a little snap to them.  No one wants a mushy pepper, so be careful not to overcook them!

After the 30 minutes was over, I took the cover off and broiled on low for 2 minutes to let the cheese bubble up a bit.

And thank goodness for leftovers!  These were so delicious re-heated in the microwave!  You could even freeze them too for a busy day's dinner.